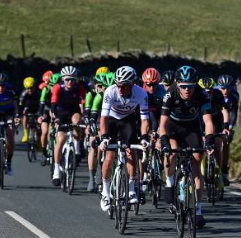 British Cycling has confirmed that the 2017 edition of the HSBC UK National Road Championships will take place on the Isle of Man.

The significant British road event will occur on the island in June; national time trial champions will be crowned on Tuesday 22ns and the road races will be announced on Sunday 25th.

Jonny Clay, British Cycling’s director of cycling, said: “We are thrilled to be returning to the Isle of Man for the biggest date in the British road racing calendar. The island is steeped in cycling heritage, passion and tradition – making it the ideal venue for such a prestigious event.

“In addition to its unrivalled cycling history, the Isle of Man enjoyed a hugely successful return to hosting elite cycle racing in 2016 with the Manx International Grand Prix, so we have great confidence that this year’s HSBC UK National Road Championships will be a tremendous occasion and help to underpin elite road racing on the island and raise its profile nationwide."

Chief minister Howard Quayle added: “This will be a wonderful opportunity to welcome some of the world’s best cyclists to our shores and to showcase the Isle of Man to a wider audience. We have vast experience of hosting international sporting events and can take great pride in being chosen to stage what is undoubtedly one of the most prestigious championships on the British cycling calendar.”

Previous winners of the British national titles include Sir Bradley Wiggins, Lizzie Deignan, Mark Cavendish and Laura Kenny, while the 2016 road races were won by Adam Blythe and Hannah Barnes.