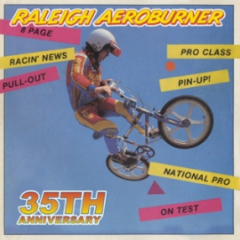 Is there any way to stop re-sellers?

This morning Raleigh released the anticipated re-issue of the classic Team Aero Burner. The model, which exactly mirrors the 35 year old original BMX, has been the subject of media hype due to its extremely limited run – only 350 models were made available to the public.

The bikes officially went on sale at 9am for a price of £500 per unit, leaving many of the 7,000 pre-registered prospective customers empty handed. Within minutes of the model selling out, five listings appeared on eBay, some sporting price tags of over £1,500 – more than three times the original price.

Having reported on the release of the Burner previously, BikeBiz immediately received an outpour from readers via both e-mail and twitter questioning the legality of the re-sellers, many of whom have high approval rates on eBay. “You shouldn’t have to be rich to have a chance of getting a Raleigh bike,” tweeted one individual, whilst another wrote “I trust that Raleigh didn’t facilitate this, but surely something can be done to prevent the immoral actions of these opportunists?”

(Example of one of the many listings on eBay.)

Raleigh confirmed that the company did all they could to prevent mass re-selling on bidding sites by making registration mandatory for all buyers, whilst implementing a strict one-per-customer system. “Every measure was put into place to ensure that the whole process ran as smoothly and as fairly as possible; this process was communicated to our prospective buyers to manage expectations and ensure full clarity throughout,” said sales and marketing director Pippa Wibberley.

“We have had an incredible response to this launch with over 7,000 individuals pre-registering for the sale of just 350 bikes. Today, the sale went live at 9:00am and the bikes sold out within 67 minutes; at the peak time, there were 6,500 people in the queue to purchase!

“We have received an overwhelming response, and as this is a limited edition bike, demand far outweighed the quantity we produced. We hope that we have served to delight some long-standing Raleigh BMX fans with this exciting replica. Moving forwards, the leads gathered from this fantastic campaign will be used in the re-marketing of the wider Raleigh UK product portfolio, driving consumers into our bricks and mortar Raleigh IBD stockists throughout the country,” she concluded.