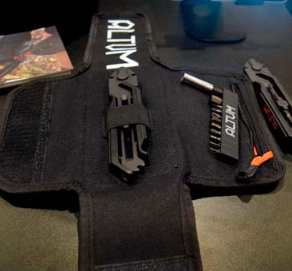 The 2017 London Bike Show was a significant event for BikeBiz. Not only did we host the hugely successful BikeBiz Awards, celebrating the brands and distributors who have truly pushed the industry forwards in the last 12 months, we also sponsored one of the most innovative sections of the show – the Innovation Lab, which allows young and up-and- coming brands to display their cutting-edge products to the wider industry.

Velohub : Velohub was founded just 12 months ago, when a group of students were struck with the idea for a truly responsive safety light for cyclists. “Cyclists have a reputation amongst road users for being unable to properly convey what they are intending to do. With our first product Blinkers, road users will gain more awareness and bike riders will gain more visibility and respect on the road. We want to integrate bikes better into the road infrastructure through the use of different kinds of lights,” said representative Javier Bilbao. The unit features a powerful red light which is controlled by an internal accelerometer that automatically activates to signify slowing or stopping, whilst two winged white lights act as indicators similar to those on a motorbike. The lights are all controlled via a simple unit, which is secured to the bike’s handlebars. The unit is easily secured and removed from the bike via a magnetic mounting unit.

HeadKayse: HeadKayse is an item that you can expect to see in your local bike shop in the near future. The company was founded in 2013 with the intention of creating a soft and foldable cycling helmet. The resultant product not only folds to a thickness of around four inches – possibly thinner than the vast majority of so-called folding helmets on the market – but also presents a comprehensive and durable protection offering through the use of a new flexi-material called Enkayse. The material differs from the traditional polystyrene construction in that it is not limited to a single usage. In-fact, according to designer George Fox, the helmet will last indefinitely regardless of the amount of trauma it is subject to. “It’s a genuinely amazing product, and it’s the result of countless hours of development from our end. We use a single unit hooked up to a gigantic iron hammering device to display the effect of impacts; the helmet has been struck over one hundred times and it’s still perfectly safe for use,” said Fox.

Rinsekit: American creator Chris Crawford invented the Rinsekit device to combat his bicycle-cleaning issues when on the go. The device works like a conventional portable washer and shower with various modes from a relatively weak but wide spray of water to a small and focused stream capable of cleaning even the filthiest of bikes; but its unique selling point lies in its ability to perform to high standards, without actually containing any form of engine or electrics. The unit works purely on the power of water pressure and is capable of holding up to two gallons of liquid. It can also hold any water-based solutions and cleaning products to make bike washing even easier in remote locations.

Tailfin: Entrepreneur and keen cyclist Nick Broadbent formed Tailfin in 2015 with the intention of creating a truly unique bicycle rack. “Whilst commuting to work every day and riding farther afield on the weekends, I was frustrated with the status quo. Tailfin is my answer to sweaty backs, racks that are put on once and never removed, excess weight and ugly shapes.” The product is an ultra-light carbon unit with a smooth curved design and a simple-yet-effective latching system that can attach to any road bike without the use of tools in just seconds. When not in use, the rack folds to create an almost completely flat unit that is easily stored in a bag or drawer. A matte black, 24-litre, waterproof pannier bag complements the unit with a rigid carbon backbone for security and durability.

Cycle Safety App: After witnessing a horrific road accident in which a heavy goods vehicle collided with a cyclist due to a suspected blind spot near his home of London, inventor Joseph Edet decided he needed to be proactive in preventing similar future road collisions. His solution was an app that can be downloaded by both bicycle riders and drivers of HGVs that can actively identify any collision risks on a real-time map and therefore prevent blind spots from causing accidents. The app is currently available from both the iOS and Android app store.

Altum : The Modual unit from Altum comes to the London Bike Show having recently successfully completed a crowdfunding campaign in which the pack received over £18,000 from more than 400 backers. The unit was designed by entrepreneur Daniel Varney to combat the hassle of carrying bulky bicycle tools when riding; it combines 14 tools and functions onto a magnetic central unit and includes tyre levers, wrenches, screwdrivers and hex keys, all of which are contained in a secure, pocket-sized canvas wrap. “This is our first true commercial endeavour; we’re just finding our feet and starting to build up relationships within the industry. The show and specifically the Innovation Lab seems like a perfect place to spread the word,” commented Varney.