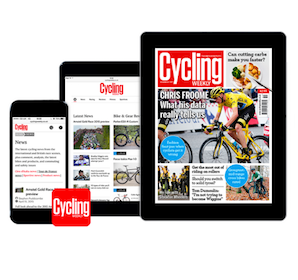 It’s an interesting time to be part of Time Inc’s cycling division; having moved from Central London to a brand new office in Farnborogh, Hampshire, the 125-year-old Cycling Weekly magazine and MBR platforms have set a course for significant growth under the watchful eyes of cycling division managing director Steve Prentice and head of market Sean Igoe.

With the aid of a rejuvenated team of contributors, events specialists and marketing experts, the pair has spent the past year working on a series of projects, including the progression of the events department, growing online numbers to increased levels and pushing the magazines forwards – whilst retaining the heritage of the titles. We sat down with Prentice and Igoe to discuss the recent successes, the future of Time Inc and what they have to offer the cycling trade.

It’s been a busy 18 months for Time Inc’s cycling division. How’s the new office going down?

Steve Prentice: Our teams have settled in very well. It’s genuinely extremely exciting times for the business. There’s a lot of stuff we’ve done in the last 18 months that we just haven’t really talked about. We’ve now got new offices, a new photo studio, video editing suites and a great new workshop. We’ve invested in our digital team, the site is growing fast and there’s a completely new advertising team. And Cycling Weekly posted a strong print ABC. It’s a completely refreshed team and a refreshed business.

Sean, you have a rich history in the industry, can you tell us a bit about it?

Sean Igoe: I’ve been in the market around 12 years. I’ve worked on the launch of Bikeradar, the acquisition of Cycling News and launched Cycling Plus. At Dennis I worked on the launch of Cyclist, Bikes Etc and Cyclist track days. When Time Inc approached me, it was a no brainer. What’s happening is genuinely exciting. Specialist sports is a massive area for Time Inc because the readers are extremely dedicated to their passions; cycling is probably the biggest focus in this part of Time Inc, which excites and terrifies me all at the same time!

Events are taking a pretty central seat in the new Time Inc ecosystem, how did that come about?

Sean Igoe: We’re probably the only B2C media business in the UK who can create content around our events. On the flipside, we’re the only content business that has got its own events now as well; it’s really becoming interesting because with these new assets, we can provide our customers with a full product placement opportunity, which we can deliver in both digital and print. UKCE is the biggest sportif company in the UK – we will produce 80 events in 2017. The first event we did was back in January; between then and next December, there’s an event on literally every weekend – sometimes four! It’s a powerful thing to be able to offer and it’s getting bums on bikes once again. We’ve got a lot of people who spend a lot of time obsessing over what makes a good event. We make sure the events are as safe as possible; we have a really diverse range of riders taking part from true enthusiasts on high-end bikes to mates who just want to take part in a fun day of riding.

So if a brand or shop came to you and said they wanted to start a new event series, what process would you go through to put that together?

Sean Igoe: There’s a team who work exclusively on the events side of the business, which comprises of experts whose sole job is to produce and market those events. It’s a complicated job, but they can tailor that route to the unique selling point of the event, whilst negotiating with local authorities. These people live and breathe this stuff and the end result is you get a top-quality event. Our cycling team does the marketing in-house.

Can you give us an example of this service in practice?

Steve Prentice: Wattbike is a perfect example of our working strategy. Together we’ve crafted a new group of three events called the No Excuses series. It’s called that because if you don’t show up to the event, your admission money goes straight to charity. They have been sell-out events.

Sean Igoe: As the headline partner, Wattbike benefits from content pushed through all of our channels in Cycling Weekly, they get naming rights and access to our database. We work very closely to develop bespoke partnerships and deliver a truly well rounded package.

Would you say that online is becoming more of a key platform?

Steve Prentice: It’s very important to us. The site has grown very fast since 2015, when we invested in more editorial resource for content and video. The next year will involve growing digital further. In March we became a .com which will improve our performance in search and internationally.

How many people do the brands currently reach?

Sean Igoe: During the Tour de France, the Cycling Weekly website reached 2.5 million users. On Facebook alone, Cycling Weekly reaches 4.5 million people per week. The Cycling Weekly Twitter page is up to 220,000 followers. Social media as a portfolio is approaching a million likes and follows, so it’s big growth on every platform. MBR online traffic is up over 40 per cent year on year. On-site video views are growing rapidly too.

So what content is featured in the new videos?

Steve Prentice: Subject matter ranges from Tour de France highlights to evergreen content such as how-to videos. The team broke the SRAM etap story online first last year, and of course, the core content on Cycling Weekly gets replicated online. Each piece is around two to three minutes in length. The team is also producing more and more commercial content which we push through our network.

Sean Igoe: We did live streaming of the revolution series last year – the numbers were very strong. We got up to 300,000 views on Facebook live, which was the first live cycling race streamed on Facebook in the UK.