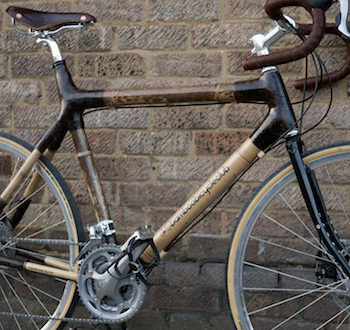 Harvest some British bamboo and make a bike out of it

Cornwall’s Eden Project is teaming up with the Bamboo Bicycle Club to create a workshop in the shadow of the Biomes where participants can design and make their own bikes from canes grown at the project.

The bamboo bike build is set to take place from May 4-6th in advance of the third annual Eden Classic sportive on Sunday May 7th.

Over three days participants will learn how to build their own bicycle frame onsite, beginning with the initial bamboo selection and cutting, right through to fitting the wheels.

They will also have free admission to the Eden Project and the Eden Classic, which takes hundreds of riders on a choice of three routes from Eden to the stunning Cornish coast and countryside.

Bamboo Bicycle Club co-founder James Marr said: “We’re doing something that hasn’t been done before – inviting cyclists to choose bamboo canes from a growing clump, harvest them and build a bike to their own design and fit. Then they have the exciting prospect of taking part in a great challenge ride on their brand-new bamboo bikes.”

Eden Project MD Gordon Seabright, a former CEO of the Cyclists’ Touring Club, said: “A peloton of bamboo bicycles in our big cycling event the Eden Classic would be a fine sight to see.”

The frame-build costs £650, plus VAT, and in an additional one-day workshop the Bamboo Bicycle Club team will teach riders how to fit the rest of the bike, either through recycled components from an old bike or fitting new ones.