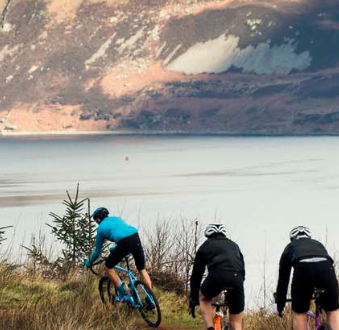 Dain Zaffke, director of marketing at Giro Sport Design, tells Hayley E. Ferguson about why Giro is bringing Grinduro to the UK, and what the event offers participants, and how the US and UK markets differ in cycling…

What is Grinduro?
Grinduro combines the best of a gran fondo with a gravel grinder and a mountain bike-style enduro. You ride one long loop (about 60 miles) on a mix of dirt roads, tarmac and singletrack. It’s a mass start event (which in itself is kind of cool because you’re pedaling alongside top pros and heroes of cycling), but you’re not racing the entire route. Riders are only timed on four short segments. These segments are each five to ten minutes long and vary from descents to climbs to flats. The magic of Grinduro is that it’s equally a social ride and a bike race, and the most well-rounded rider will be rewarded by the best overall time in the combined stages.

What does Grinduro bring to the Giro brand?
Throughout Giro’s 31 years in business, we’ve made a lot of great friends on bike rides. We’ve always said, “people like us when they get to know us,” but up until we launched Grinduro California two years ago, we’ve been pretty limited on our reach. It was primarily the folks in and around our small coastal town of Santa Cruz, CA, that got to ride with us and got to know us. Hosting Grinduro allows us to connect with the people that are the most important to our business, the people that use our stuff every day. It’s pretty great to ride alongside Giro founder Jim Gentes and have a long chat about bikes or cooking or the weather or design. Because so much of Grinduro is casual, we’re able to make some true connections with riders on course as well as afterward at the fire pit or in the artbike exhibit.

Why are you bringing it to the UK in 2017?
The US and UK are very similar in terms of cycling trends (as well as music, art, and so on). In the past three years alone, gravel riding has really taken off here, and Grinduro has become one of the hottest events in America. We know that events like the Dirty Reiver (200k gravel grinder in northern England) are gaining momentum and it’s only natural to bring the other side of gravel riding to the UK.

How important is the UK market to the brand?
For Giro, the UK is one of our top bike markets outside of the US. Giro has great distribution there and a great partner in ZyroFisher. The UK market has embraced our top new products in recent seasons and is definitely taking back the mountain for Giro, following our success in the US.

Are there any key differences between the UK market and the rest of the world?
To be honest, I don’t think about the UK market very differently from the market here in the US. Generally speaking, the most popular athletes in the UK are the most popular here, fashion trends are similar and some of the best media content that we enjoy in the States comes from England. I think we can all spot the differences between the market in mainland Europe (especially a more traditional country like France or Italy) and the market in the US or UK. We have seen a few global `trends in cycling start here in the US, and I’m hoping that Grinduro becomes one of them.

So what prompted you to do an event of your own?
Some of us at Giro wanted a competitive outlet that represented the way that we ride on the weekends with our “cross bikes”. It’s all about riding big loops on mixed surfaces, hammering some sections, then regrouping and then having a beer afterward. Part of it was seeing a need to celebrate descending on drop bars and 700c tires – too many road racing and gravel events are focused on suffering. And finally, part of the impetus came from spectating and participating in mountain bike enduros, where the focus is entirely on flat-out descending. Personally, I tend to have more fitness than skill, and I’ve always thought to myself: “What if enduro mountain bike races had timed climbs?” Grinduro captures all of these elements into one super fun event that’s inclusive to riders from all categories and just about any ability level.

So is it a party or a serious race?
It all depends on who you ask! Because you’re only timed on short segments, riders have the freedom to admire the views, stop for photos, tell stories or just ride a swift pace throughout the loop.

Time for the crucial question– which bike should you ride and what kit should you wear?
There’s a lot of debate about the best bike, partly because we’ve designed the course so that there’s no real disadvantage to any kind of bike. You can ride a road bike with 27c or bigger tires, you can ride a ‘cross bike or ride a mountain bike. At some point during theroute you’ll be on the “perfect bike.” I say ride what makes you the most comfortable. If that’s riding a full suspension mountain bike wearing a Camelbak and baggy shorts, then do it. My personal choice is a disc-brake equipped cyclocross bike with 40c tubeless tires. The past two Grinduro events in California were won on drop bars in the pro men’s, pro women’s and most of the amateur categories too. But the top five had plenty of mountain bikes and the people on mountain bikes might have been smiling more… So it’s a pretty tough call!

The Isle of Arran has often been described as Scotland in miniature, what can riders expect from the route?
The route is stunningly beautiful. They call Arran Scotland in miniature because it has a bit of everything… craggy peaks, dense and dark forests, wide open grassy pastures and rugged coastline. The Grinduro route takes in all of these elements and combines a mix of fast tarmac, flowing singletrack and a few challenging climbs to keep riders engaged.