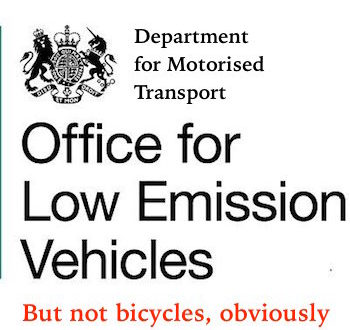 Gov’t offers grants for e-cars, e-vans, e-motorbikes but not e-bikes

The UK’s Office for Low Emission Vehicles offers grants to purchase electric cars, vans, and motorbikes, but will not offer similar grants to would-be purchasers of electric cycles and cargobikes. In 2014, the Bicycle Association raised the inequity of similar e-vehicle sweeteners, available since 2010, and the government promised to "consider" the funding disparity.

According to tweets from the OLEV, there are no plans to, er, plug the gap.

Harrison, a trustee of London Cycling Campaign, replied: "How do e-motorbikes & e-bikes differ in that respect?"

OLEV responded: "There aren’t petrol or diesel powered bicycles," and added that "not sure there are many people considering a petrol motorcycle than could be persuaded to buy a bicycle instead."

OLEV, which is a part of the Department for Transport, calls e-vehicles "plug in vehicles." Bicycles are vehicles in law but when the DfT talks about ‘plug in vehicles’ it only ever means electric cars, vans and motorbikes.

Back in 2013, BikeBiz pointed out that the government is happy to subsidise the purchase of low emission e-cars, but won’t offer the same support for non-emitting bicycles.

You can get an @OLEVgovuk grant towards the cost of a new electric (plug-in) car, van or motorcycle #ev #ulev #zev https://t.co/ypsfSJ67SR

It’s important to note that the OLEV subsidy scheme is not like the long-running Cycle to Work Scheme. That’s a salary sacrifice, not a grant, and is not available to everybody. Anybody with cash can get an OLEV grant to buy an e-car, e-van or e-motorbike. The paperwork is handled by the motor dealer. The "plug in vehicle" grants are, in effect, free money, no strings attached.

In a separate but linked development the government has announced it is to introduce a bill forcing motorway services and large out-of-town retailers to provide charging points for plug-in vehicles.

Motoring, it seems, is considered as a "national" priority, while cycling is considered "local" and therefore less important and subject to the whims of local politicians and funding streams.