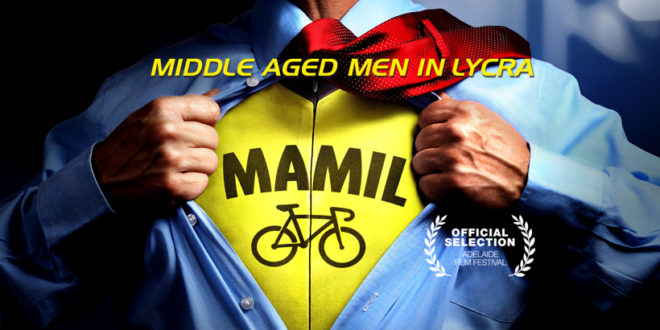 Get ready for ‘MAMIL the movie’

Billed by the producers as “witty, insightful, poignant and thoroughly entertaining,” a new documentary about "middle-aged men in Lycra" is due to hit cinema screens soon. MAMIL the movie, made by Waterbyrd Filmz and distributed by Demand Films, also explores mental health and road safety. It is narrated by Phil "the voice of cycling" Liggett.

The one-and-a-half hour doc was written and produced by Eleanor Sharpe and Nicholas Bird. It features riders from the USA, Australia, Spain, New Zealand and the UK, and premiered at the Adelaide Film Festival in South Australia late last year.

Some of the film’s footage was captured on Cycliq cameras, and the Australian camera brand is also the movie’s supporting sponsor.

Demand Film CEO David Doepel said: “We are thrilled with the innovative ideas the collaboration with Cycliq has produced – in particular, ‘mamilcam.com’, which draws inspiration from the filmmaking style of the director Nick Bird."

Doepel said the film would be of interest outside of cycling circles, too.

"We strongly believe that the film can create empathy and insight for the non-cycling community and fellow road users,” he said.

Bird said: “I know the world of the MAMIL intimately and was driven to explore this world on film and explore the reasons why middle-aged men are taking up cycling in such numbers. As we explored the idea we quickly saw that a documentary about MAMILs would give us the chance to explore topics like masculinity, men’s health issues, how men support each other, and how minority groups and women fit into this world.”

The UK premiere will be screened at the Odeon in Bath on Monday, 26th February at 7.15pm. There will also be a trade screening of the film at iceBike* which takes place at Arena:MK in Milton Keynes on 20-22 February.

MAMIL will then be screen in selected cinemas throughout Australia, Ireland, New Zealand, UK and USA.

The acronym MAMIL was coined in 2010 by Michael Oliver for a research report he compiled for MINTEL.