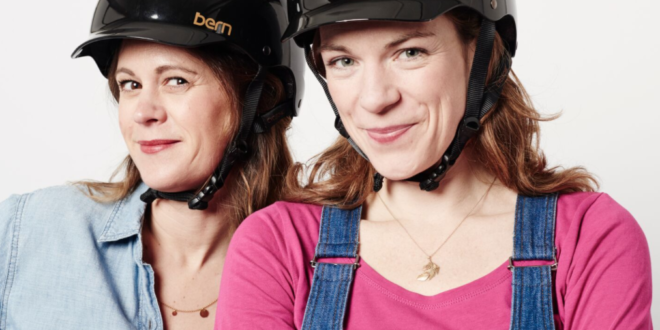 Caz Nicklin is definitely not wearing Lycra. She meets me for lunch after a sample sale at the Cyclechic offices; it occurs to me over our meal that she’s a sort of stealth cyclist.

In fact, I wouldn’t classify Nicklin as a cyclist at all. Not the armoured-from-head-to- toe sort, at least. She’s a person who just happens to love the lifestyle that comes with riding a bike. So much so that, eight years ago, she established a business focused on changing the face of commuter cycling, so that other women could enjoy riding their bikes as much as she does. And not wearing Lycra is a cornerstone of Cyclechic.

“In 2007, I was working in television. I lived in Shepherds Bush, and the job I had was in Battersea, so my public transport commute was a real faff. I started thinking that maybe I could cycle it,” says Nicklin. “Not many people were cycling in London at the time. It was very much the Lycra-clad racers. Anybody who cycled was in high-vis. But I thought it could be quite a nice ride, even though I hadn’t been on a bike since I was about 12 years old. It was a baptism with fire, but I was massively inspired. I loved cycling for the practicality, the convenience; I found it to be mood lifting. But I was also really scared of the road, and realised that I wasn’t very safe.”

Nicklin was also frustrated with the dated image projected of commuter cycling. It became clear to her that this desperately needed an overhaul if it were to become appealing to more women. “Whenever I researched cycling advice for women, Google would come up with these awful pictures of a few ladies from the 80s. The photos were just hideous, and completely irrelevant to the kind of cycling I did.

“Because I didn’t feel very fulfilled in my job, I started blogging about cycling, and the fact that there were no decent accessories. I offered advice about second-hand bikes, and all of the other things I thought would be useful for people to know. Then people started reading it, and getting in touch. I began meeting people who had similar ideas.”

Blogging allowed Nicklin to establish a community of like- minded cyclists who wanted stylish accessories, but everything really took off when a box of Bern helmets entered the scene.

“I couldn’t find a flattering bike helmet. They were all really square and sporty. It became my mission. Actually, I downloaded a digital version of BikeBiz, and I found out that Ultra Sport Europe had just taken on Bern. Although they were available for snowboarding, the cycle helmets weren’t sold anywhere in the UK. So, I phoned Ultra Sport up, and ordered a whole box of them. Then, I started selling them on my blog. Ladies would come to my flat and try the helmets. Suddenly, I had a whole waiting list. That was when Cyclechic started.”

Cyclechic’s core customer base remains fundamentally what it was eight years ago: women who cycle as a sort of mode of transport more than as a sport. Urban female cyclists. The company is geared at enabling women to cycle in their day-to-day lives, and making it a desirable, accessible choice. “It’s not really about the sport for us. We do sell some Lycra, cycling shorts, jerseys, but we get most interest in the helmets, the panniers, the rainwear, the gloves – the things that you need. You want to protect your head, you have stuff to carry. Our products have to be both stylish and functional.”

Despite ample traditionally feminine branding, evidence would suggest that men are not at all discouraged from using the website. “We introduced male products because we were getting so many requests. Now we get guys buying for their girlfriends and wives, but also men who just like to look good, or just ‘like themselves’ on their bikes.

“We’re always on the hunt for new, commercially viable, exciting products. That’s how we survive. If we spot something, or are approached, we initially like to meet the people at the company for a chat. That’s how we’ve made some really lovely partnerships and friendships in the cycling world. We’ve worked with Bobbin Bicycles and Sawako Furuno from day one, when we were all in the very early stages of our businesses. We like to collaborate with people who are similar to us.”

In managing Cyclechic, Nicklin says that an interest in cycling has been very useful. “I don’t know if it’s 100 per cent necessary, but I think it’s important to have passion for the work that you do.” Still, she considers a good eye for products to be her most important skill. “The business came about because we had great products. It’s essential to have an understanding of the market [to which you’re catering], and the products that it needs. That’s the key: caring about the details, and being creative in how you put your brand and your products out there.

It’s clear that interaction is also a key to running an online store, though. Because they work in different offices, Nicklin and her business partner, Lavinia Smith, open every day with a phone conversation. “We always have a debrief. There are so many different things it could be. I come in once a week to Dalston, and work the rest of the time in our office in Faversham. But we meet up regularly. Problems can arise when everybody’s too remote. Especially with a start-up, it’s so important that the communication is good. So we always make a point of having the face-to-face. You need to be dynamic as a team.”

Because Cyclechic is established now, there has been more time to work on new projects. In 2014, Nicklin wrote The Girls’ Bicycle Handbook for publisher Quercus. “They came to me and asked whether I’d like to publish a handbook for female cyclists. I said yes, and that was it really!” Unfortunately for fans of the book, however, there are no companion texts in the pipeline. “It was great for the business. I really enjoyed researching and writing the book, and loved the fact that it is helped women to get back on their bikes as adults. But, I don’t have plans to write another – it would take a lot of time out of my day-to-day.”

Now Frame It – a business that helps people get photos out of their phones and into their homes – is her most recent venture. “I came into cycling because I was inspired by the industry; I became an entrepreneur because there was a gap in that market. I was excited by the opportunity it offered. Now Frame It comes from the same place that Cyclechic did – a sense of wanting to act on that gap. I saw that lots of people – including me – were frustrated with having tons of great photos on their phones but not ever doing anything with them. Getting digital photos framed can be a real faff, so I wanted to make it super easy for people, allowing them to do it directly from their phones and, similarly to Cyclechic, offer them stylish, modern products. We used everything we’ve learnt about online retail over the last eight years to build the business, and in the run-up to Christmas it has really taken off. Come January we will be talking to Angel Investors to really get Now Frame It off the ground in 2017.

“Cyclechic has been going for eight years, and we’ve got certain routines in place. Because Now Frame It is in such early stages, it still needs a lot of attention. Now, Lavinia takes care of the customer service and logistics for Cyclechic, but I’m still very much involved in the strategy and long-term objectives, and oversee the press and marketing.” And while they are established in separate industries, the foundation of both businesses is their customer-centricity. “Our mission is to recreate personable customer service online. What I loved about the sample sale today was talking to our customers. They come in, have a chat, you find out what kind of cycling they like. It’s nice to have face-to-face as well.”

Marketing also remains a chief priority for Cyclechic. It’s for that reason that the company employs a freelancer, Jude, to take care of their social media. “We actually might be looking for someone else to join the team for marketing next year! We meet up with Jude once a month to talk about all the things we want to promote. It’s all about having conversations. We use our time to discuss the website, looking at analytics, and how people are finding us. We get a lot of direct traffic from people who’ve heard of us [through word of mouth]. There are loads of organic searches. We’ve been on the internet for a while, and the blog dates back to 2007.”

Because cash flow is always tricky for independent retailers, a great deal of effort goes into considering which products the team should order, and in what quantity. “When it comes to customers and products in retail, there are a lot of little issues that have to be sorted right there and then. We may not have ordered very much of a product that suddenly gets press coverage. We then have to discuss whether we should get a bigger order. The last thing we want is to sell out.”

Nicklin isn’t confident that a company like Cyclechic would have the same impact in other sport industries. “I’m not sure I’ve seen the same trend in other sports. Cycling is unique, because it is a lifestyle choice, a mode of transport, and a sport. It’s had a massive surge in popularity and has become cool and fashionable. So, women have become attracted to it, but are also very safety conscious and cautious. Cyclechic was needed, and came at the right time, with cycling becoming so much more popular while certain barriers remained in place.”

Looking to the future, the women at Cyclechic are open collaborations with brands who are interested in developing products for the female commuter market. In particular, Nicklin would like to see someone design a new, stylish bike helmet. “There’s a new brand that’s come out, and they’re very exciting, but also very high-end. We want a middle price point, around £50. A new kid on the block. There are a lot of companies doing high-end stuff, but we always want to offer an affordable version too. There’s always some space for fashionable high-visibility gear, too. We would love for anybody who designs stylish hi-vis to come talk to us. It’s about finding the right products, whether they’re helmets, or bags, or rainwear.”