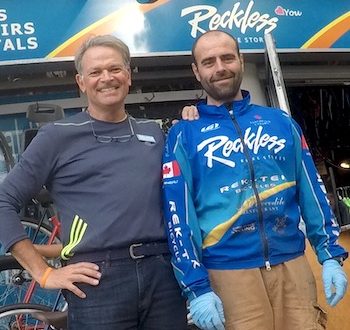 I’ve been known to buy stuff online (who hasn’t?) but I also hang out in flesh-and-blood bike shops, writes Josh Reid, and it’s been my experience that the best bike shops are true hubs of their local communities. The best, according to this editorial, "stoke excitement, stimulate imaginations and – a critical point for some people – promote cycling in the round."

That’s certainly true of Reckless Bike Stores of Vancouver, Canada. Owner Paul Dragan doesn’t know me from Adam, but he has gone out of his way to make this British lad feel welcome. You can’t get that sort of personal kindness from an online retailer.

Let me explain what I’m up to here in British Columbia. As a pre-university thing I’ve got a two-year Canadian work visa and I worked as a ski instructor last winter and then, to make lots of cash, I spent nearly three months as a wilderness tree-planter. (Money really does grow on trees.) Now, at a loose end, I’ve migrated to the city and, thanks to some sage advice from Vancouver bike blogger and author Chris Bruntlett, I’ve been trying to get some bike shop work while I wait for the snows to fall again.

One of Chris’ suggestions was Reckless, a three-store IBD founded in 1986, and while I didn’t get a job (Canadian bike shops slow down as the winter approaches) I got a bike! Paul said I could borrow a hack bike to allow me to ride around Vancouver looking for work.

I’ve been doing that, but then I noticed that a sportive would soon take place – a closed-road ride on the famous Sea to Sky Highway, uphill from Vancouver to Whistler. The RBC GranFondo is the largest sportive in North America, and as a roadie (with rusty legs) I was itching to give it a go.

I cheekily asked Paul if I could use his hack bike to participate in the event. He said no.

Instead, he gave me code to enter the $200 ride for free – Reckless is a sponsor of the event – and he let me borrow a flat-bar hybrid.

I turned up on Saturday in my Lycra (it’s called Spandex in North America) on a hybrid next to folks on $10,000 super-bikes. I rode the 152-km "Forte" version of the ride, the longest of the options, which added a climb up Cypress mountain. I then turned around and rode back. 250kms in one go – sweet!

The following day I returned the bike to Paul, thanking him profusely. I know where I’ll be buying my bike bits while I’m in town. Really, you can’t beat a community-focussed bike shop.