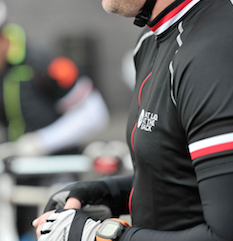 Cycle-wear brand Fat Lad At The Back has reported a 100 per cent increase in registrations for its Up North Sportive just weeks after tickets went on sale.

The brand reports that it has been inundated with registrations for this year’s event with more than 400 people signed up to date, compared to 200 riders at the same point in 2016. 80 per cent of those registered are new to the FLAB Sportive.

The figures are a significant achievement for event organisers Richard and Lynn Bye, who created the event in response to customer demand.

The Up North sportive was designed as an inclusive event that is suitable for riders of all skill levels. So motivated are Lynn and Richard to inspire a new wave of cyclists to get onto the saddle, they’ve invested in a team of FLAB advocates called Flambassadors to support cyclists on their way and ensure no one rides alone.

Speaking ahead of the event – which takes place this May 7th and sees rides of 25 miles, 50 miles and 75 miles in length – Fat Lad At The Back Founder Richard Bye said: “We’re astounded by the response we’ve enjoyed to this year’s event so far. Our number one ambition is to give people the confidence to ride, no matter what their level of cycling ability.

“To enjoy a 100% increase in participation so far in what is a highly competitive sector is fantastic.”

Ambassador Ade added: “Up North really has established itself as the friendliest cycling event around. The routes are challenging enough for all levels of cyclist, but the only person you’ll be competing with on a FLAB ride is yourself and, even then, we encourage our community not to be too hard on themselves – whatever distance you cover in an hour, it’s your hour. It’s an achievement no matter what.

“I’m really looking forward to welcoming so many new faces and to enjoying the journey together.”

Up North routes take in some of Yorkshire’s iconic countryside from Greenhow Hill, Malham Cove and the isolated valley of Littondale.

Richard concluded: “Up North isn’t just about testing your endurance, it’s about enjoying the ride, the people and the banter.”