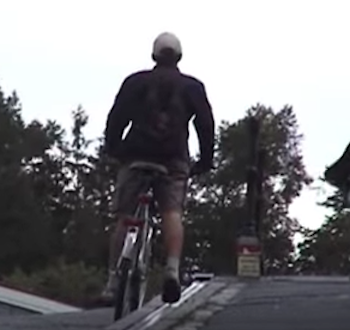 A ski-style bike lift could be installed on a steep hill Edinburgh after the idea was short-listed for a share in millions of pounds of Scottish Government funding for cycle infrastructure. Such a lift has been operating in Trondheim, Norway, since 1993.

Four other schemes have also been shortlisted, including separated cycleways. All five of the shortlisted schemes – including another one in Edinburgh – will now complete detailed proposals thanks to £40,000 development awards.

Ian Maxwell of the city’s cycle advocacy group Spokes (which was founded in 1977) told the Scotsman he was sceptical of the bike lift idea:

"An electric bike would be a better bet for people who have problems cycling up hills," he said.

"A bike lift could become a tourist attraction, but there are more important priorities for cycle spending."

Daisy Narayanan, deputy director for built environment at Sustrans Scotland, said: “We are absolutely delighted with the extremely high quality of entries .

"These proposals are exemplary in their understanding of the need to improve our streets for the well-being of everyone.

"Critically, local authorities across Scotland have shown they are keen to enable access for pedestrians and cyclists of all abilities.

"The country is embracing the health and economic benefits of a modal shift in how we design our streets and roads.”