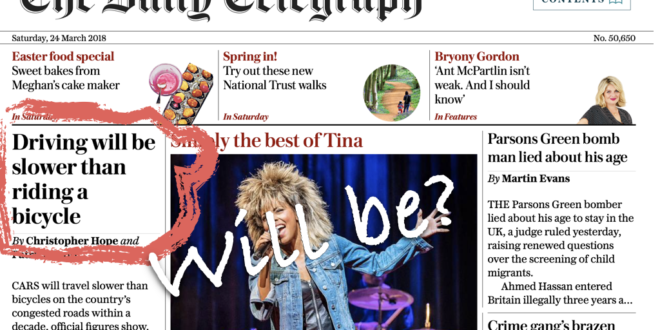 Driving set to be slower than cycling, worries The Telegraph

It’s not just coaches that are slow, cars are too. That’s the main headline on today’s Telegraph.

Now, rule number one when reading The Telegraph online: don’t read the comments. Today’s are particularly rabid, blaming traffic congestion not on everybody wanting to be in places at the same time, but on immigrants. The actual piece, though, which leads the print edition also, is a great advertisement for cycling – in the future you’ll get around quicker on a bike than in a car, confirms the newspaper.

Thing is, that future, in many places, is already here. In the City London, for instance, the average motoring speed on A-roads is 7.6mph. Go much slower than that on a bike and you’d fall off. Manchester’s motorists rip along at the decadent average speed of 15.3mph. The average speed in the whole of the UK was a paltry 18.4mph in 2017, down a mile-an-hour in just three years, according to official stats.

Britain started building bypasses and new arterial roads in the 1920s, and yet nearly 100 years later motorists are still not able to always zip along at the speeds car advertisements infer is their birthright

In an "exclusive" that’s anything but The Telegraph warns that things will only get worse for Britain’s beleaguered motorists. Within ten years, motorists around the UK will be crawling around at the kind of speeds that the motor-car’s 19th Century pioneers would have considered a tad lackadaisical.

In London they already do. My average speed (including stops) cycling 6.5 miles to work is 9.6mph. A car (same journey, same time) does 8.9mph.

"EXCLUSIVE: Cars to travel slower than bicycles on our clogged-up roads within a decade" https://t.co/2xKwJruRJU via @christopherhope

Naturally, the newspaper wheels out the usual suspects to say that more roads should be built, road pricing should be introduced (the RAC has been banging on about this for so long the newspaper wouldn’t have even had to ask for their opinion) and that buses – the most Trotskyite form of transport – should be pegged back by allowing motorists to use their dedicated lanes.

And if none of this happens (spoiler: much of it will) then "if this decline continues at the same rate, cars will be travelling slower than cyclists by 2027," warns the newspaper.

By 2027? Motorists are already slower, on average, than a half-decent club cyclist, what The Telegraph ought to have pointed out is that motorists could very well become slower than unfit folks carrying ladders on heavy bikes with flat tyres.

The grinding slowness of motor traffic in dense urban cores is motoring’s Achille’s heel, and yet – as The Telegraph helpfully and perhaps unwittingly points out – it’s one of the core advantages of city cycling. Here’s hoping some of the newspaper’s readers will absorb the inadvertent subliminal message, and get on their bikes instead.