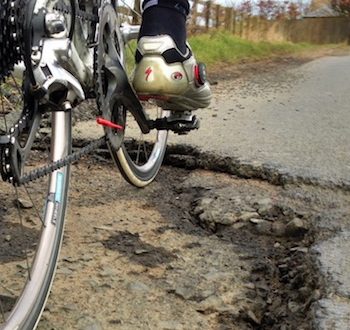 A coroner has written to the transport secretary telling him that the DfT’s new pothole repair policy will "increase the risk of future deaths, in particular to cyclists." This follows the death of an 83-year-old who hit a pothole while riding his bike on Bury New Road in Ramsbottom in March 2016 and who died from his injuries the following month.

Peter Sigee, the assistant coroner for Greater Manchester North, said that the death of Roger Hamer on a potholed road in Bury could have been prevented.

The coroner’s report was sent to the chief executive of Bury council and to transport secretary Chris Grayling in August, and it was published on Judiciary.gov.uk last week.

Sigee highlighted that the local highway authority had failed to repair the potholed section of road involved in Hamer’s death despite being warned of the dangers. The coroner also highlighted that the local authority may be even less likely to fix such potholes in future because it was now following new guidance issued by the Department for Transport in October 2016. Well-Managed Highway Infrastructure: a Code of Practice states that potholes of 40mm or deeper should be merely "investigated". Previous practice had been to repair any pothole “found to be 40mm or deeper”.

Signee wrote: “Defects which measure less than 40mm may not be investigated and defects of 40mm or above may not be repaired . . . I consider that the new procedure will increase the risk of future deaths, in particular to cyclists.”

He told the Bury’ council CEO and the transport secretary that "action should be taken to prevent future deaths and I believe you have the power to take such action."

On 20th September Grayling responded to Sigee saying he was "saddened" by Mr. Hamer’s death and that the "safety of all road users, including cyclists, [is] a priority."

Grayling failed to answer the coroner’s point about the DfT’s new guidance, adding only that "it is for local authorities to decide and determine the dimension of a pothole as a basis for their decision-making."

"When the road is pot-holed it means that cyclists are more likely to swerve and this increases the likelihood of collisions. Hence we believe that more should be done to make good road maintenance a priority. It is worrying that the coroner in this case has suggested that the ‘New Procedure’ will increase the risk of future deaths, in particular to cyclists."

“Rather than building new roads, the Government should adopt a “fix it first” policy. The UK has an estimated £12 billion pothole problem that a £6 billion pothole fund is meant to fix by 2021. If the Government was serious about mending our roads, it would reallocate funding from the £15 billion Road Investment Strategy and give local authorities the means to bring Britain’s roads into an acceptable condition.”

(Some years ago the DfT told cycling organisations that it would consult with them over the pothole guidance that was subsequently issued in 2016 but this promise was not carried out.)

"A highway authority has a duty to maintain the roads within its jurisdiction, but the relevant statute does not set any particular standard to meet other than to say a road should not be dangerous to traffic. Government guidance in the form of Codes of Practice such as this one are therefore highly influential when determining whether a pothole should be repaired or left as it is.

"In the past, that guidance has been more prescriptive on when a pothole should be repaired. But the new guidance allows each individual highway authority to decide for itself if a pothole needs to be repaired or if it can be left as it is."

He concluded: "At a time when budgets are stretched thin, it would be naïve to think this approach will result in more potholes being fixed than was required under the old Code of Practice, and it seems inevitable that dangerous potholes will in future be left to remain a hazard to the public and cyclists in particular."

Share
Previous Disc brakes to be allowed in UK road races, says British Cycling
Next The gig is up for Deliveroo riders as they win/lose legal battle