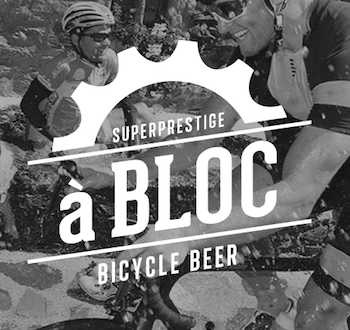 Fancy owning shares in a cycling-themed craft beer? Dutch entrepreneurs Daan van Well and Martijn Snelder are seeking investment of £127,453, and have already raised £116,135 by offering shares on Symbid.com. The pair have six days left to find the rest. And à Bloc Bicycle Beer isn’t their only revenue stream – they plan on organising events and rolling out other cycling-themed products, such as mineral waters, supplements and clothing.

"Cycling’s popularity is rapidly growing, and the demand for craft beer is higher than ever," said Snelder.

"Our beer is the perfect drink for after a ride," promised van Well. "We’ve added Alpine Minerals to improve rehydration and recovery."

The Alpine Minerals sub-brand could be used for other products, said van Well.

"This is your chance to become co-owner of a genuine craft beer brand for cyclists," said Snelder. "And let’s be honest, doesn’t that sound like a dream?"

The beer is brewed in the Netherlands. 40,000 bottles have been produced so far. The brand was launched at last year’s Rouleur Classic show in London.

"Once brewed, we sell to distributors and straight to bike channels whenever possible," said Snelder.

London’s Look Mum No Hands is one of the venues where the beer is already available, and the entreprenuers will also be at the London Bike Show this week.

Share
Previous Book review: Horrible history of the 200-year-old bicycle
Next Madison and Bliss to launch new products at iceBike*