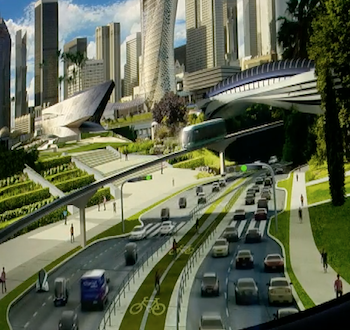 Ford CEO Mark Fields today told attendees of the North American International Auto Show that his company is about mobility not just selling more cars. In front of a giant screen at Detroit’s Joe Louis Arena the Ford boss said that bikesharing would play a big role in the cities of the future. Behind him an animation showed the city of today and the city of the future – gridlock morphed into free-flowing roads as space was removed from cars and given over to rapid transit, bike lanes, green space, and wider sidewalks.

Fields said there was a "wider range of transport solutions" out there. "Cities around the world facing gridlock and pollution," he added. "We know these cities need a partner to deliver mobility solutions. Ford is deeply committed to being that partner."

Last year Ford teamed up with Motivate of San Francisco to roll out the Ford Gobike bike sharing syste. 7,000 Bay Area bikes will soon to be able to be undocked via the Ford Pass smartphone app.

Fields also introduced former New York Mayor Mike Bloomberg, speaking from a remote studio – he revealed that Bloomberg Philanthropies, Ford and the Aspen Institute are to start working on smart mobility with the Mayors of London, Helsinki, São Paulo, Tel Aviv, and Washington, D.C. This is in addition to the five inaugural cities announced in October last year. These were Austin, Buenos Aires, Los Angeles, Paris, and Nashville.

This global initiative aims to help city leaders plan and prepare for the emergence of autonomous vehicles and other "intelligent" mobility solutions.

Also on stage during the Ford presentation was Bill Ford, the company’s executive chairman. The great-grandson of Henry Ford expanded on some of the themes he gave in a 2011 TED talk.

"Nearly six years ago I gave that TED talk," he told NAIAS attendees. "We started that day to become an auto and a mobility company."

He said gridlock was a "massive challenge to mankind." And showing examples of Ford’s latest pedestrian-avoidance technology he added "We have the chance to make people’s lives better."

In his 2011 TED talk Ford said: "I believe we all must turn all of our effort and all of our ingenuity and determination to help now solve this notion of global gridlock. Because in doing so, we’re going to preserve what we’ve really come to take for granted, which is the freedom to move and move very effortlessly around the world."

The problem, Ford stressed, is one of mathematics. "Today there are approximately 6.8 billion people in the world, and within our lifetime, that number’s going to grow to about nine billion. And at that population level, our planet will be dealing with the limits of growth. And with that growth comes some severe practical problems, one of which is our transportation system simply won’t be able to deal with it.

"The bigger issue is that global gridlock is going to stifle economic growth and our ability to deliver food and health care, particularly to people that live in city centres. And our quality of life is going to be severely compromised. The answer to more cars is not to have more roads."

This theme – that building more roads is not the answer to congestion – was continued earlier today after the main corporate presentation when Ford hosted a new TED talk – "The Future of Mobility".