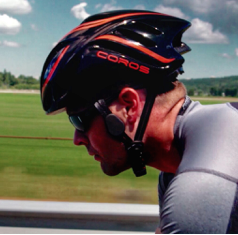 The LINX was designed to serve the demand of cyclists who prioritise safety and was funded by a successful Kickstarter campaign that raised over £319,000 from 2,135 backers.

The helmet uses bone conduction technology in lieu of earbuds to let riders safely listen to music, receive calls and communicate with other cyclists and road users with full awareness of cars and their immediate surroundings.

LINX comes with a wireless smart remote so that the rider can keep their eyes on the road and hands on the bars while controlling their media and calls with the tap of a button. A mobile app is available for ride tracking which can be downloaded via either the iOS or Android app store.

The helmet also includes an emergency alert system that is triggered when the G-sensor picks up a significant impact; this sends an alert with GPS notification to a designated loved one.