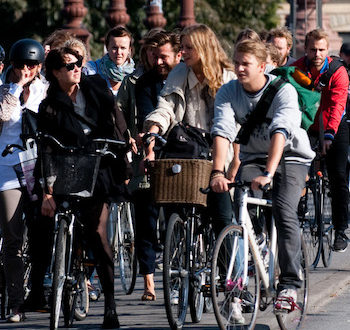 Copenhagen’s wide cycleways to be widened even more

Copenhagen Municipality will next week unveil a new bicycle strategy to bolster the position of bicycling in the Danish capital. Cykelstiprioriteringsplanen (or Bicycle Path Prioritisation Plan) 2017-2025 will take the place of previous cycle-infrastructure-expanding plans.

10,000 of Copenhagen’s 600,000 citizens contributed views to the plan. 62 percent of respondents were said to be unsatisfied with the width of cycleways in the city, so some of the major ones are to be widened.

The city’s cycleways take up just 7 percent of the road surface yet cycling accounts for more than 50 percent of how residents get around. (54 percent of Copenhagen’s roadspace is devoted to motorists, and a futher 12 percent is accounted for by car-parking spaces.)

Copenhagen built at least one mile of cycleway every single year from 1912 to 1969, with just a slight hiatus between 1970 and 1974, followed by an even greater building spurt between 1975 and 1985, when five miles of cycleways were installed each and every year.

In November 2016, for the first time since Copenhagen starting counting traffic entering the city centre, there were more bikes counted than cars.

“It is a clear indication that continuous municipal policy and investment in Best Practice infrastructure pays off," said Copenhagenize’s Mikael Colville-Andersen at the time.

In 1970, Copenhagen manually counted 351,133 cars and 100,071 bikes. In 2009, the city installed its first electric bike counter, and now has twenty monitoring traffic across the city.

Bicycle traffic has risen by 68 percent in the last twenty years. This is partly because Copenhagen’s population is steadily growing, with the inner city set to increase from 600,000 to 715,000 people within the next fifteen years.

In December 2011 the municipal council unanimously adopted the new cycling strategy, "good, better, best – The City of Copenhagen’s Bicycle Strategy 2011-2025" which aimed to make Copenhagen the world’s best city to cycle in.

The new bicycle strategy – currently a holding document, and in Danish only – will be released next week. Previous plans have been also available in English.

Share
Previous Chris Boardman to speak at Spin 2017
Next Gov’t offers grants for e-cars, e-vans, e-motorbikes but not e-bikes