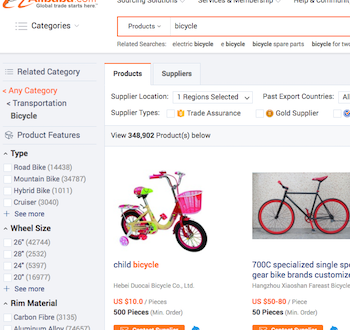 The US Office of the Trade Representative has added Taobao, the e-Bay-a-like small seller platform owned and operated by China’s ecommerce giant Alibaba, back on to a list of platforms suspected of selling counterfeit goods. Alibaba itself was on the list in 2012.

The "notorious markets" list is a bad actor listing of known and suspected counterfeit and pirate platforms.

Alibaba was taken off the list four years ago, but the US Office of the Trade Representative now claims Taobao is used to sell "high levels" of fake goods. This includes bikes and bike parts, as revealed in the 25,000-word BikeBiz series of articles on counterfeiting published earlier this year.

Alibaba has rejected the allegations, although it was suspended from the International Anti-Counterfeiting Coalition in May.

At any one time, there are up to 2800 cycle-based Chinese trading companies vying for business on Chinese e-tail malls such as Alibaba, Aliexpress, DHgate, and US-based apps such as Geek.

In a 2014 filing with the US Securities and Exchange Commission the Alibaba Group wrote:

Alibaba removes 120 million suspect listings each year. The group’s online malls have seven million merchants offering 800 million items – ranging from cosmetics to swimwear, and from electronics to sunglasses. Of the 60,000 Dahon folding bikes for sale on Alibaba’s sites, half are fakes or infringe Dahon’s design rights. Taiwan-based Dahon spends more than $200,000 a year to combat counterfeiters.

Alibaba went public on the New York Stock Exchange in 2014, in the richest-ever "initial public offering". Alibaba only launched in 1999, yet its merchants racked up nearly $400bn in sales in 2014. The company says it spends more than $16m a year on 2000 staff tasked with tackling counterfeiting, which is "a cancer," Alibaba founder Jack Ma has said.

Brands that spot fake products on the online Chinese malls can get them removed by submitting "take-down" requests.

In a 2012 filing connected with its IPO, Alibaba said it takes seven to 10 days for its websites to process takedown requests, although the process is shorter for brand owners or IP tracking firms who achieve "Good faith complainant" status by storing their trademarks, design rights and brand names on Alibaba’s servers.

"Most of the times, the counterfeits are removed within one day from the take-down request," Michele Provera of Convey told BikeBiz. Convey is an IP protection firm and works for brand owners such as Pinarello, Castelli, SMP and 30 or so others.

Algorithms can easily spot the fraudulent use of brand names, so merchants get around this by not listing them. Instead, they will place photos of, say, Pinarello frames next to listings that, to an algorithm, look as though they’re connected with plain carbon bikes. It’s up to brand owners – and trackers such as NetNames, MarkMonitor and Convey – to spot the use of photos. Some of the photo tracking can be done with image recognition software, but the fakers can obscure them enough to throw sniffers off the scent. Many of the photos have to be spotted, and flagged, manually. The fakers can post new listings, from newly named merchants, just as quickly as the offending ones can be taken down.

The likes of Geek, DHgate, AliExpress and others make it easy for Western consumers to buy from China. The "direct-from-the-Chinese-factory" websites and apps are distorting the marketplace, making it appear that retailers of genuine products are gouging consumers. For consumers, it’s caveat emptor, or buyer beware.