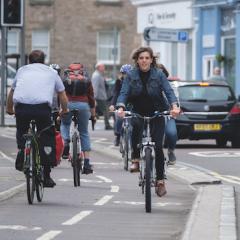 The report, which bikebiz covered here, stated that in what Sustrans called the "UK’s biggest assessment of cycling in cities", 78 percent of those surveyed by the charity wanted more protected cycleways – even when this could mean less space for other road traffic.

Speaking on the new findings, Herrlin commented: "Cycling as a mode of urban transportation has exploded in popularity over the last decade. Private ownership of bikes has been increasing, alongside global bike sharing schemes, with new ones entering the market everyday. Safe, accessible bike lanes are a must in order to facilitate this shift.

“The use of bikes in cities promotes health, reduces congestion, and can be a more efficient mode of transportation, but all of this is dependent upon creating a safer infrastructure that separates cyclists from automobiles."