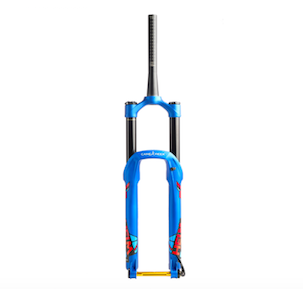 Cane Creek Cycling Components has announced that it has completely sold out of its Launch Edition HELM suspension fork.

The fork, painted in a distinct blue color-way, was limited to 300 numbered units and produced to mark the launch of Cane Creek’s debut into suspension forks.

“With Cane Creek’s legacy of innovative products, we’ve had a lot of requests over the years for a fork and the Launch Edition HELM represents the moment that became a reality,” said Cane Creek president and CEO Brent Graves. “These forks are a little piece of history and that’s really cool for the 300 riders who now have them on their bikes.”

The Launch Edition HELM went on sale earlier this year – along with the Factory Black Edition of the fork. The forks have been hand built and tested in the company’s Asheville North Carolina headquarters and delivered to riders and distributors.

“These forks have been incredibly popular for us,” said product manager Sam Anderson. “The fact that there are a very limited number of the Launch Edition HELMs out there in the world really appeals to people and that’s in line with the forks other distinctive features – especially the ability to quickly and easily adjust everything from air volume to travel. People want their bike to be a unique reflection of them and this fork helps them do that. I think it’s safe to say you’ll see more limited color-ways in the future.“

To date, the Launch Edition blue HELM is the only colorway aside from black to be offered for general sale, however Cane Creek produced a small run of chartreuse forks for use as demos at this year’s Sea Otter Classic in Monterrey California. Five Sea Otter forks were then offered for sale with $500 from the sale of each fork benefitting the International Mountain Bicycling Association.