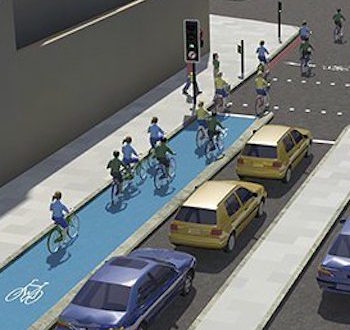 A new study from American academics shows that if a city constructs protected cycleways it leads to an uptick in health-enhancing riding. In short, adding cycleways to a city is a high value for money public-health investment.

The study from Mailman School of Public Health at Columbia University in New York quantifies the health benefits of the extra cycling that takes place on separated cycleways, and concludes that such infrastructure offers a significant return on investment. In UK terms, if more cities became cycle-friendly the NHS would save billions of pounds.

“The cost-effectiveness of bike lanes in New York City" has been published in Injury Prevention magazine, and states that for every $1,300 New York City invested in building 45 miles of cycleways in 2015 provided benefits equivalent to one additional year of life at full health over the lifetime of all city residents. In comparison, dialysis, costs $129,000 for one quality-adjusted life year, or QALY.

According to Reuters Health, per person, the $8-million protected cycleways created an additional cost of $2.79 and a gain of .0022 quality-adjusted life years.

“For [cycleways] the cost per QALY is $1,300, higher than vaccines but way lower than most medical interventions that we have in healthcare,” said study co-author Dr. Babak Mohit.

"Our regression analysis, to estimate the marginal addition of lane miles on the expansion in bike ridership, reveals that the 45.5 miles of bike lanes NYC constructed in 2015 at a cost of $8-million may increase the probability of riding bikes by 9.32 percent," said Mohit.

The study concludes that "investments in bicycle lanes come with an exceptionally good value because they simultaneously address multiple public-health problems" and they are "more cost-effective than the majority of preventive approaches used today."