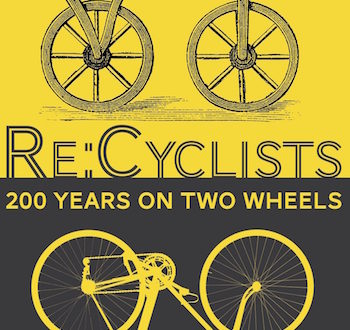 It’s pretty tough to write funny books about history. Terry Deary manages it with Horrible Histories, of course, and Michael Hutchinson has written a funny book about what could be – and often is – dry-as-sticks: the history of the bicycle.

As you’d expect from the Lycra-clad author of The Hour, Re:Cyclists starts with a time-trial story, but Dr. Hutch is no mere hired hack, he clearly has a deep love for cycling’s history. This much is plain from his tale about leafing through the back issues of Cycling Weekly (which is itself historic, launched in 1891 as just Cycling).

Re:Cyclists looks at how cycling became the sport, the pastime and the social life of millions of ordinary people, how it grew and how it suffered through the 1960s and ’70s, and how at the dawn of the twenty-first century it rose again.

There’s also a lot of Hutchinson in the book, which is no bad thing. For instance, he describes about learning to ride a penny-farthing:

"If you take to the open road, no one cuts you up in a car. (Of course they don’t: you’re an unpredictable lunatic on a penny-farthing.) You’ll also notice that your altitude, while odd for a bike, is not so very different from a horse rider’s. I tend to assume this familiarity had at least some role to play in the acceptance of the penny-farthing, because otherwise the idea of being that far off the ground, sitting atop something which often appears to have a mind of its own, would have been utterly impossible to sell to anyone who wasn’t already an acrobat. (Horses, incidentally, are really, really not impressed by penny-farthings. They react much as they would if one were riding a rework. I don’t imagine nineteenth-century horses were any more relaxed about them.)"

Hutchinson is a former professional cyclist, and has won multiple national titles in both Britain and Ireland, and represented both countries internationally, as well as Northern Ireland at the Commonwealth Games of 2002, 2006 and 2010.

Mannheim in Germany is rolling out the red carpet for cyclists this year as it celebrates the two-hundredth anniversary of the invention of the proto-bicycle. The Draisinne was created by Karl von Drais, a forestry civil-servant and lowly aristocrat who lived in the city. The Laufmaschine – or "running machine" – was famously ridden in the gardens of Mannheim Schloss, and this castle will be one of the locations for a great many celebratory events in the city this year.

And later this year Germany is to celebrate the bicycle’s bicentenary with the issuing of a twenty Euro coin featuring the Laufmaschine.