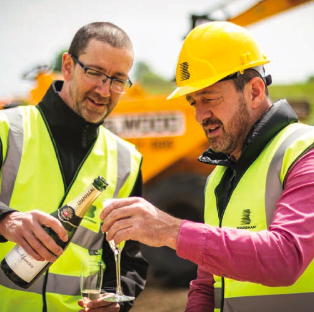 Boardman Bikes has announced that is has now broken ground on its new Performance Centre at The Valley Retail Park near Evesham in Worcestershire.

After almost three years of planning, construction of the 18,000 sqft site has now started with the grand opening scheduled for early 2018.

The Performance Centre will offer a unique customer experience for cyclists and triathletes of all levels, from Olympic, Paralympic and Tour De France Champions to weekend leisure riders. The facility is designed around Boardman’s own cycling specific wind tunnel, the first of it’s kind in the UK, which will sit at the heart of the site.

Alongside the wind tunnel will be a range of bike, fit and physiology suites to enable testing and refinement for both individual and team riders, as well as Boardman’s first UK brand store and cycling café.

Chris Boardman said: “To be the first to do anything is always a challenge, and for a huge ground-breaking project like the Performance Centre, even more so. Now we have finally started construction, I’m really excited the finish line is finally in site.

“People who know me will tell you I tend to play things down and avoid superlatives but for this project, I feel confident in saying when the doors open in early 2018, it will be a genuine game changer for the sport of cycling. Making aerodynamic understanding accessible to anyone who want’s to go faster – be they sportive rider or pro athlete – will be nothing short of revolutionary.”

Further details on the facility will be released frequently over the coming months.