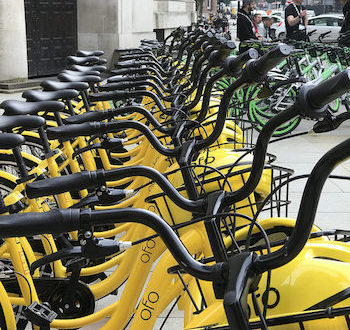 Six bike-share operators have agreed on a modus operandi for cities looking to tender for their own schemes. The agreement was brokered by Bikeplus, a charity working to maximise the benefits of bike share schemes.

Dockless bike-share schemes have been operating in the UK for some time but with the arrival of Chinese companies there has been an acceleration in uptake and media coverage (some of it negative), as BikeBiz has been reporting on this year. Cities can now have bike share schemes without the massive capital commitment required for dock-based schemes.

Hourbike, Nextbike, Ofo, Urbo, O.bike, UMS Bikes have agreed on a modus operandi via the Bikeplus-organised operators and suppliers group. Other suppliers – such as Mobike – have expressed support for the modus operandi but are still in the process of looking at the legal implications of signing.

Bikeplus has issued a letter from the six stressing that "city-scale bike share an affordable, rapidly deliverable part of the solution to key urban policy objectives including air quality improvement, access and accessibility, congestion reduction and health improvement".

The six signatories have collated a set of recommendations for cities to consider when developing public bike share.

The recommendations include "a need for regulation rather than individual city guidelines."

It is suggested that the Bikeplus Accreditation Scheme is adopted as a standard. The scheme has been developed with consultation with public and private sector bodies, and has the advantage compared to codes of conduct of providing third-party scrutiny, says Bikeplus.

There should also be a transparent competitive process: "Where funding is being offering a tender process will be required, however where a scheme is being privately financed the group recommends that cities move from the use of a full tender to a simpler ‘request for proposals’ where all operators are invited to outline what they could offer towards a set of requirements to a defined open timetable. Alternatively, a licensing system could be adopted to select who can operate in the area particularly where attracting more than one operator is desirable."

Bikeplus states that: "Public bike share is a proven tool for increasing cycling amongst new and existing riders. A powerful opportunity has arisen to increase modal share by bike if coupled with good management. It is important that negative publicity is avoided."

“Bike sharing has the potential to transform the way we travel in our cities and make getting from A to B cleaner, greener and more fun. But in a fast-growing sector like this it’s crucial that there’s a mechanism for maintaining high standards and ensuring the needs of the customer and local authorities are met.

“Operators must work closely with cities to ensure an open and transparent procurement process, so that the public can have confidence that they are getting the best deal for the locality.”