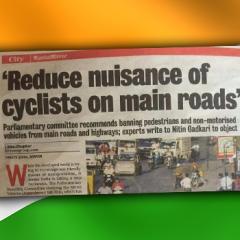 Last month BikeBiz reported that a motor-centric parliamentary committee in India recommended that cyclists should be removed from roads, but this threat has now been averted. Road Transport Minister Nitin Gadkari has said the Indian Government will not be adopting the recommedations of the parliamentary committee but will instead promote cycling as one of the ways to reduce air pollution.

The committee studying the Motor Vehicles (Amendment) Bill 2016 had warned that "nonmotorised vehicles do not follow road rules and create a lot of nuisance."

However, according to India’s Financial Express, Gadkari has poured cold water on the committee’s recommendations: "I can tell you as the transport minister that we want to promote cycling.” He told reporters that cycling is “the best” form of transport to curb the “growing menace” of pollution.

Gadkari pointed out that India is adding cycle infrastructure to cities in order to encourage cycling.

“I appeal to countrymen to use bicycles as much as possible," he stressed.