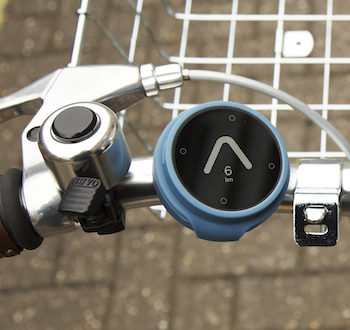 The BeeLine handlebar navigation device – seen recently at the CES show in Las Vegas – goes on sale soon. The Bluetooth navigator – created by a British team – raised £150,185 on Kickstarter from more than 3,000 backers.

BeeLine is a compass-like device that links to a smartphone and informs riders of the direct distance and direction to a chosen destination. Cyclists then pick their own route, heading in the general direction indicated by the handlebar-mounted device.

BeeLine has an e-paper screen gives crisp information in all light conditions, and there’s a backlight for night riding. The device is waterproof and will last for up to four weeks of normal use before needing a recharge.

Riders use the BeeLine app, for iPhone and Android, to set a destination with a drag and drop. Once the destination has been selected, riders can put their phones away and BeeLine will guide them from start to finish.

An email to Kickstarter backers says:

"We want to make it absolutely clear that all Kickstarter backers will be getting theirs first, followed by anyone who’s pre-ordered since Kickstarter and only then will any new orders be sent out. We wouldn’t dream of sending it out to the newbies until our all you guys who’ve been with us since day one have been sent yours."

The device – which can be unclipped and used away from a cycle – is expected to ship next week. A similar device called Haize – also British – is also close to going on sale.

The BeeLine is one of the finalists in the BikeBiz Awards 2017.