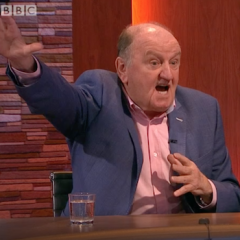 BBC’s “cyclists are Nazis” guest apologises only to Jewish people

BBC Nolan Show guest George Hook has apologised to Ireland’s Jewish community for likening cyclists to Nazis, but he hasn’t extended the apology to people who ride bicycles.

Despite having been suspended from his own radio show for rape comments the BBC invited Hook on to a live discussion programme last week. During transmission he pulled a Nazi salute and accused all cyclists of "wearing Brown shirts and singing the Horst Wessel song."

The segment aired on BBC’s Nolan Live in Northern Ireland. The piece was supposed to be about the Bike Life report from Sustrans which claims that the majority of British people want to see cycleways installed even if that means taking space away from motorists. If the audience’s reaction to that suggestion, and the "cyclists are Nazis" comment, are anything to go by the Sustrans survey may not be as representative as claimed.

Nolan – not a noted lover of cycling – invited Hook on the programme to give an anti-cycling point of view (for which he has previous). Author and broadcaster Malachi O’Doherty put the case for cyclists.

Hook’s comments about cyclists led to outrage on social media. The veteran broadcaster has now promised not to do a Nazi salute again, reports Ireland’s Independent newspaper.

The Jewish Representative Council of Ireland said he was “absolutely wrong” to use such language, as it diminished the atrocities of the Nazis.

The group’s spokesman accepted Hook “was not anti-Semitic in anyway whatsoever” but did not add that it was wrong to disparage cyclists.

Hook told the Herald newspaper he did not mean to cause offence to Jewish people. “I’m not going to do it again,” he said.

He added that he had been invited on to the BBC show as a member of “the anti-cycling lobby”.

Maurice Cohen, chairperson of the Jewish Representative Council, said it was wrong to make the gesture.

“We would condemn any reference to Hitler or the Nazi regime to illustrate, even with hyperbole, another discussion or topic,” he said. “It is absolutely wrong and to be condemned, as it diminishes the terrible atrocities of the Nazi regime.

“We know that George Hook would not, in any way, wish to offend Jewish people or be anti-Semitic in any way whatsoever. We would urge him, and others, to think carefully before referencing that worst period in humanity’s history.”

“If the member of the Jewish community says they would prefer if I didn’t do it again, then you can bet your bottom dollar I’m not going to do it again.”

Hook has made many previous broadcasts disparaging cyclists.

Share
Previous Huel launches ‘sport approved’ Huel Professional
Next Who is your cycling industry woman of the year?