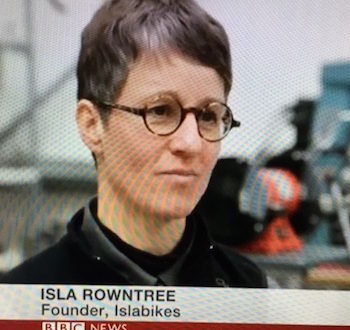 Isla Rowntree has been interviewed on the BBC News for her sustainably-produced steel-frame rental children’s bikes. The BBC piece linked Islabikes’ "Imagine Project" to the so-called "circular economy", and Rowntree was also interviewed for Radio 4’s Woman’s Hour today.

"Utopia is a bicycle that lasts for ever," Rowntree said at the end of a company video promoting the Imagine Project.

And after her appearances on the BBC, Rowntree is taking her concepts on the road. She’s the keynote speaker at a circular economy event in Peebles, Scotland, on 19th January.

Organised by the Mountain Bike Centre of Scotland, a business incubation service based in Glentress, Remanufacture & Re-use in the Cycling Industry will also have a talk from a company which has an environmentally-friendly process of breaking down tyres that produces a high grade recycled rubber crumb.

The event is in partnership with the Scottish Institute for Remanufacturing, Zero Waste Scotland and Scottish Manufacturing Advisory Service, and looks into how businesses can design products to have a long life and can be re-used at the end of their life