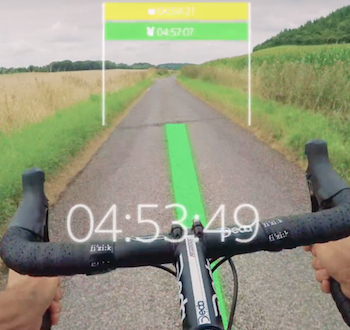 WaveOptics, a UK startup which builds optics for augmented reality hardware, has raised £12m in Series B funding. The Oxfordshire-based company uses cycling to promote how its "waveguide-based optics" will be used in the real world. This is tech based on hologram physics and photonic crystals.

Using the point-of-view of a road cyclist WaveOptics shows an augmented-reality journey starting with a virtual look at the bike’s tyres before the cyclist is given turn-by-turn navigation while he’s riding. The male rider can also see his heart rate and speed, and has races with friends to grab Strava-style king-of-the-mountain marks, with virtual finish lines in his field of view.

TechCrunch reports that WaveOptics secured its latest funding from previous investors Octopus Ventures, Touchstone Innovations plc and Robert Bosch Venture Capital GmbH; along with new investor Gobi Ventures of China. (Could one of the first commercial products be a virtual reality headset for electric bike users? Bosch makes motors and electronics for e-bikes.)

As well as mocking up how its optics work for cyclists WaveOptics also says its tech will "revolutionise logistics”, something that could be of interest to companies such as Chain Reaction and Canyon bikes, which already use tech to streamline their warehouses.

Earlier this month BikeBiz carried a review of the Everysight head-up-display Raptor sunglasses. The Israeli company behind the glasses is now readying for a market launch and allowed journos to play with its tech at Bike PressCamp in Deer Valley, Utah. While this was HUD tech not VR it shows that tech players are interested in cyclists, who are early adoptors of new technology.