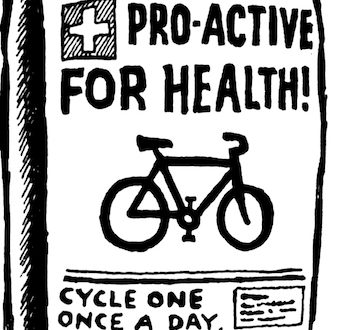 More than 20 million people Brits are physically inactive according to a report by the British Heart Foundation. The charity’s Physical Inactivity and Sedentary Behaviour Report warns that inactivity increases the risk of heart disease and costs the NHS around £1.2bn each year.

"Evidence shows keeping physically active can reduce the risk of heart and circulatory disease by as much as 35 percent and risk of early death by as much as 30 percent."

Nearly half of all residents in the North West of England are insufficiently active, said the BHF’s report. In the South East it’s 34 percent. 1.6 million people in Scotland – or 37 percent of the adult population – are said to be physically inactive.

The latest National Travel Survey reported that 66 percent of all journeys are under five miles, or easy cycling distance.

Graphic by Polyp via Bike Hub.